Death broke my family once.

It all started when my grandfather had a stroke. He was the pillar holding up my dad’s side of the family. My dad has three brothers and four sisters. One of his sisters has five children. We’re a big family and it was only suitable that grandma and grandpa’s house was our home base. None of us ever called them grandma or grandpa–they were essentially second parents to us. We called my grandmother Mama Alma and my grandfather Papa Luis. We’d shorten the names to Mama and Papa, which translate to mother and father in English. That’s how critical they were–and are–to the fabric of the family.

Every major holiday, birthday, or celebration was held at their house. They had a huge, two-story, red brick house with a balcony where we would sleep on cots under the stars. In the back yard, there was an avocado tree and an orange tree. There were huge turtles we would feed corn tortillas and white rabbits we would feed lettuce.  The house was also haunted, but what special house isn’t?

One of my aunts and one of my uncles had houses behind my grandparents’ house. Another of my uncles had a wife whose family lived down the street. And for symmetry’s sake, another of my aunts had a husband whose family lived down the other side of the street. I could walk into the corner store and say I was so-and-so’s daughter and everyone knew who I was. It felt like everything had been strategically arranged before I was born.

The best breakfast in town

Every morning my grandmother made a big breakfast. Huge bowls were filled with every combination of eggs you could imagine. Beans and fresh tortillas were brought in from the small tortilla factory a few blocks away. Everything was within walking distance and after breakfast my grandfather would sometimes take us to his rancho, where orange trees covered the fields. We would ride in the back of the truck and pick oranges as he strategically passed just under the branches of the trees. We’d arrive back at the main house on the rancho sticky, covered in juice, and smelling like dirt and citrus.

Life was glorious and as far as I was concerned I had the best family in the world. There were tons of kids to play with, aunts and uncles to tell me how special I was, a grandmother to spoil me, and a grandfather who knew everything about everything.

I remember being in my dorm room pressing the snooze button for the third time when my phone rang. It was my mother and it wasn’t a normal time for her to call. I knew before I answered that there would be tears. My mother knows how to keep it together when she needs to and she did that for me during that phone call. I’m an only child, but I’m the oldest of the first generation of cousins living in the United States. It was always understood that I was responsible for telling my younger cousins bad news and sharing my easter egg hunt candy with them.

One by one, I called my cousins to let them know. It was like a procession and I felt like the grim reaper.

I couldn’t go to the funeral and I felt incredibly isolated from my family. I was alone and my family was mourning and there was no one to hug. This is the first time I felt detached from them.

After that, there were slowly fewer holidays, birthdays, and special occasions held at my grandparents’ house. My grandmother eventually moved out, creating an identity crisis for many of us.  It was as if a part of us had been taken away. There was no home base anymore. We still made it work, though. We saw each other and we loved each other. But it wasn’t quite the same.

I was much older now, and while I missed the innocent, fairy tale illusion of my childhood, I could now appreciate the wisdom and company of my older cousins. While I have many cousins, only six are women. (The aunt I mentioned with the five kids?  All five are men.)

I was very close to my cousins and I spent months living in Mexico with the cousin closest to my age, Lety. She was unlike anyone else in our family and she gave us life through her laugh. She taught me about makeup and how to push on the hose with my thumb so the water would shoot out. She taught me about love and, most of all, about loving myself. She inhaled life and was a magnet to everyone around her. She could make you feel special in a room full of people.

When someone dies when they’re old, there is sadness. When someone dies at a young age, there is anger and hate. I never want to know what it’s like to lose a child, but I’m certain it changes who you are. A piece of every single one of us died that day. For some of us, it changed who we were a little bit; some for the better and some not. We couldn’t be in the same room without bursting into tears randomly. Everyone was reminded of her just by being around someone else in the family. We were walking reminders that one of us was no longer there. And that slowly started to break us.

We talked less. We visited less. We needed time. We needed space. We had lost our home base and on top of that there was a broken home now. Mexico itself was in a state of disarray. My grandmother was living with my aunt in the United States. We were like ants when you throw water on them: flailing, running around trying to get back to the line.

For a while, it was like this. Everyone would reach out to the person nearest them because that’s as far as our emotions could go. We would still see each other but it was once a year and it started to feel like we couldn’t pick up where we left off as we once could.

Then there was Whatsapp.

When this app came out it was really popular in Mexico. Communicating between countries had always been a problem so we all jumped on board when we realized we could text each other. A family group was made and slowly every aunt, uncle, and cousin was added. We would say good morning and good night. We would post memes about it being Monday. We would post pictures of ourselves, our children, and our pets. This may not sound like a lot but for us it was like a reunion on our phones every day.

There was finally a place to share our happiness and our lives with the people we still cared about but hadn’t known how to reach out to after we healed from the past.

The other day my aunt had a small surgery. Her son notified the group and we all sent her our goodwill and wishes. He sent a picture of her right before the surgery to reassure us she was fine and in good spirits. Most of my family is Catholic and one of my cousins suggested a prayer chain. Half an hour later we had an updated picture of my semi-sedated aunt out of surgery and ready for dinner.

The support and community felt through this seemingly simple group text brought me back to my grandparents’ house. It was like we were sitting at the kitchen table surrounded by bowls of food, avocados from the tree in the backyard, children running around, and the family together. It was like we had found our home base again. 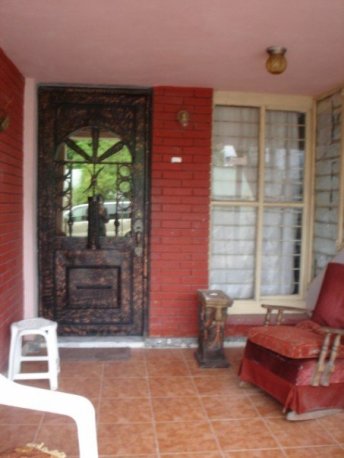 The door to the great house 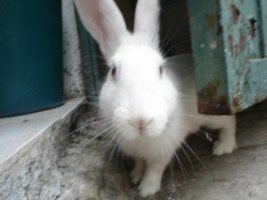 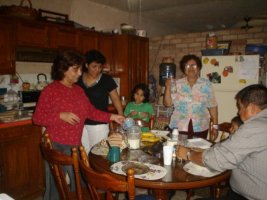 The best breakfast in town 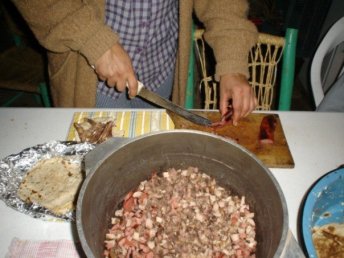 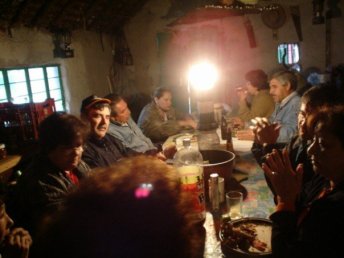 The family at the rancho