He was sitting in a red, fold out chair. The kind you see parents take to school fields so they can sit and watch their kids play sports. It looked just like the one I have in my room. An American flag was draped down the wall behind him. It was as long as the green door to his apartment is tall. He had on a faded blue baseball cap and held a natty light in his hand. I almost walked passed him but remembered seeing him out of the corner of my eye the first time I walked around the complex.

He looked comfortable. The way you look when you’re in your usual spot. The giant flag didn’t shock me so much. The number of plants he had around was sort of strange. Maybe he liked to grow things. Maybe his roommate potted them.

“Say, uh, what kinda dog is that?” he said in a scratchy, typical Texan drawl.

Who could resist? I knew he was a stranger, but I sized him up quickly and figured I could take the old man if he tried anything funny. And by funny I mean one of the million scenarios my parents decided would be my possible kidnapping or murder by a stranger.

“Huh, well he’s gotta be mixed with something to have a tail like that,” he said, chuckling.

I should have told him he was half pig. My dog is kinda fat with pink, triangle ears and a curly tail. Orbison went up to him and let the man pet him. He wagged his tail, too. I think Orbison has a good judge of character.

Usually, I ask everyone their name and try to sneak a photo. I’m still kicking myself for not doing it. I guess sometimes I feel like I’m bothering people because I ask so many questions. But as I told the man to have a good night and walked away I thought, “Maybe he was just looking for someone to talk to.”

I’ve walked around this complex enough to know he isn’t the only one. Plenty of people sit on their porch or patio on plastic chairs, benches or stairs. They watch everyone go by. Occasionally waving at a neighbor they’ve gotten to know.

If I could meet someone new everyday, it would be my favorite part of the day. I love hearing new stories and meeting new characters. Everyone has something to show you and I’m continually fascinated by how different each person is or what you could end up having in common with someone you thought was completely different from you. This man, who has a huge flag displayed on his apartment wall, drinks half water/half beer and is probably more than twice my age, is just like me tonight.

We sit in our respective spots and admire a pig dog.

I do hope that man wasn’t lonely. And that he just likes to sit on his porch sometimes and enjoy a beer like my dad does occasionally.

But the next time I see him, I’ll certainly ask his name. Maybe even where he got his plants or that enormous flag. 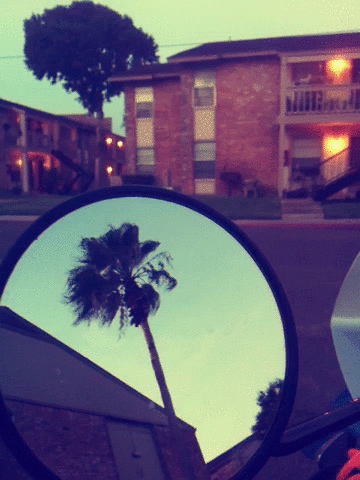